While illuminating the scene was visited by the Norwegian computer scientist who developed Blinn Phong renderer which photorealistic Real-Time Ray Tracing simulations utilise with modern GPU's.

Rendered on RISK chip Architecture server borrowed from the ThrustSSC team, the only car ever to go faster than the speed of sound, we hosted the live time trials breaking UK internet records at the time.

With a restrictive practice 5 year £10m non disclosure agreement NDA on the work.

Around this time the Grand Çamlıca Mosque in Türkiye (Turkey) underwent repairs, before work was carried out a CAD model was produced to analys the repair materials and minimise the affect to the characteristic sound of the call to pray.

Applied for architectural forensics position at the Met Police the weeks before the London Bombings in 2005.

Since a child lived in places that have seen acts of Ultraviolence carried out by individuals, and extremist groups from the IRA, White Separatism, Libyans to Al-Qaeda inspired, caused by a very small number of highly disturbed individuals. (Nature vs Nurture) is someone naturally inclined or have they been influenced by life's experiences, the media and their surroundings.

The term "Ultraviolence" comes from Anthony Burgess' novel A Clockwork Orange, the film director Stanley Kubrick withdrew (self-censorship) from the UK because of copy cat events.

Invited up the scaffolding at the Royal Observatory in Greenwich, London. Home of Greenwich Mean Time (GMT) Prime Meridian Longitude 0º when conservation work was carried out to the Roof.

Carefully and respectfully surveyed the mausoleum of Comte de Vezlo, Guilaume Henri, who died aged 7 in 1901, and his mother, Annette Rosamonde Basio, the Comtesse de Vezlo, who died in 1938.

On a visit to Venice, Ca' Foscari University of Venice link Invited us to inspect their research into new cleaning and restoration approach to stone work of UNESCO World Heritage Site, Piazza San Marco.

A European art collaboration project requested the WebGL VR version link of Palladio's St. Giorgio Maggiore’s Church in Venice to help explain to the monks a proposed art installation on the site.

2006 Studying Historic Building Conservation FdSc, was approached by the Head of School and Prof of BIM/Heritage Survey to share knowledge gained, assisted running a satellite college in the grounds of Battersea Powerstation site link, and provide site CSCS Health and Safety and training and assessment to the local unemployed residence.

Delivering on a requirement on the developer of the Grade II* listed decommissioned coal-fired Power Station, to provide training and employment to local unemployed trades-persons, Project visited by The Rt. Hon Gordan Brown FRSE the United Kingdom's Prime Minister of the day. 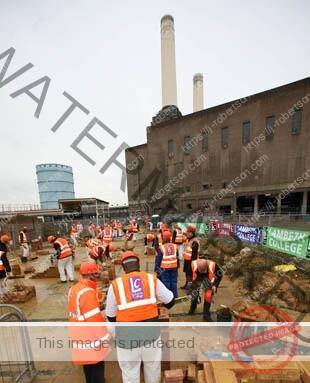 Battersea Power Station and Electric Boulevard shopping and leisure destination planned opening is Autumn 2022, located on the south bank of the River Thames, developed in partnership with stake holders including the developers and local Authority employment centre.

The development of the high value site, provided improvements in local transport infrastructure in the Northern line extension through Nine Elms, and funding to the local authority to maintain housing stock for local residents.

Researcher in daylight analysis for leading Chartered Surveyors in the field of Rights to Light in the City of London, received one to one training from the professor of Nuclear Physics at Oxford University, analysing the impact proposed building developments have on their surroundings.

Reporting research directly to the leading UK legal expert, and informed that I was two degrees of separation from the person that manages Masjid al-Haram also known as the Great Mosque of Mecca.

For example if a proposed new build is found to impact access to daylight for residence of a housing estate, they can receive compensation through courts and have the buildings design altered to minimize the impact or have it taken down.

A German 500-kilogram WWII un-exploded ordnance (UXBs) was discovered during preparation work for the extension work to London City Airport, within line of sight of UEL University of East London at the Royal Docks, afterwards visiting the Hartree Centre identified the location on their newly developed 3D interactive archaeology CAD survey of the UK from planning records, and geography indicators developed to help protect archeology and help avoid unforeseen costly construction development issues.

London is within the Thames valley, the accumulation of lethal dense smog caused the creation of the clean air act of 1956, The act established smoke-free areas throughout London and restricted the burning of coal in domestic fires and industrial furnaces, Today monitoring of harmful particles from vehicle exhausts has lead to restrictions on engine types entering London with the Ultra Low Emission Zone ULEZ 2021.

Spent time studying the British library's finest treasures, Leonardo da Vinci's: Codex Arundel, at A Mind in Motion exhibition link. sketchbooks containing studies of the Moon and its cause and effects on water, today computational oceans modelling is carried out by the STFC Hartree centre. link

Daylight Analysis in the design process

Developed an analysis process to show the impact of solar glare reflected off glass architectural structures, in line of sight of drivers at pedestrian road crossings etc. over a fixed period if time i.e low level light in mornings and evenings in Winter, Spring, Summer and Autumn.. and identify focus points of reflected sunlight as their had been instances of damage to vechicals in the past.

The 3D printed Average Daylight Factor ADF model of a print industry showstudio in Covent Garden which at its centre has a Winter garden environment, the Sun's rays enter through skylights and glass walls trap heat similar to the Greenhouse effect, while the Victorian warehouse building lacks window openings for natural light throughout the rest of the floor,  Analysis model produced for Clerkenwell design week talk.

Daylight is one of the most diffecult sciences as its a wavelength at the same time a partical, Heat Radiation, colour spectrum and brightness values. to analyis daylight and minimise computer workload, we utilies reverse raytracing, tracing the photon rays from the scene back to its source, apposed to conventional raytracing which calculates the brightness and colour emitted from the light source. This is used to help calculate the rate of Global warming.

Oil industry Lobbyists sowed doubt over the past 30 years, today the evident of climate change is irrefutable.

The Channel 4 documentary Tower Block of Commons highlighted the need for the redevelopment of dilapidated crime ridden housing estates, after it aired in 2010 to improve the lives of those affected the Goresbrook Village estate built in 1969 in Barking was redeveloped as private, shared ownership and local authority homes.

Within close proximity to Beckontree Estate the UK’s biggest council estate, and the largest estate in Europe until 1977, designed and built in 1921 to home ex-service men in the immediate aftermath of WWI, crime, and social issues steamed from lack of access to job opportunities, health care and local amenities in town planing stages.

Mosley fascist blackshirts used Hiltlers dirty politics of blaming others for their own problems in the 1930's, The British National Party used the same tactics more recently in local elections similar to Tipton in the west-midlands over a decade earlier the region was the source of extremist events from multiple sources, many untold stories of victims and good people attempting to keep level of racial harmony in the communities, especially after the national riots.

The area is currently undergoing regeneration including community projects for creative outlets, cargo containers converted into workshops, kitchens and art and crafts centers.

The Architectural redevelopment for Goresbrook Village estate was showcased to the public as part of London's urban redevelopment at the hub for the built environment. The Building Centre, home of business partner, Architecture Engineering Construction AEC specialist CADventure and the industry bookshop where I discovered the international architectural pictorial journal Social Spaces Volume I, which contains my pioneering architectural CAD designs.

As a cultural connector promoted the concept of providing skills training and employment to the local residents, to architects and developers, adopted on Barking Riverside Ltd. link apartments developed by L&Q on the 179 ha former site of Barking coal fired Power Station, alongside 2km of south facing Thames river frontage with 10,800 new homes, the site master plan SLA 3D printed model was produced by Hobs 3D team at Here East in Stratford link.

Cases of mental health issues in the workplace due to the use of AI are increasing within Smart Cities the design of applications can present problems for people with conditions such as autism.

The publics genuine consern of AI steams from the Prof of cybernetics at Reading uni who Inscerted a microchip in forearm in 1999 to open a lab door at short distance, the media hystria from his hyped up comments about future buying and selling went global to the point churchs took it as being the mark of the Beast.

National Digital Twin programme (NDTp) link, created by the Centre for Digital Britain at the University of Cambridge and housed at the Connected Places Catapult.

A free collaborative, data-sharing approach designed to improve resilience to climate change, Examining the impact of extreme weather on energy, water and telecom's networks, now adopted by 77 countries around the World.

The 3D model is the easy part, gathering information from organizations past their NDA's and finding ways to use the data that can be challenging part.

In the past mistrust of authority, lead the Chinese Communist Gov to face issues in planning for Water, Hospitals etc, as the one child policy the public would often return surveys which where inaccurate in fear of prosecution.

Due to harmful particulates produced by vehicles on the A13 Ripple Road, a 1.3KM tunnel development along the A13 (Green) is proposed, next to submerged major rail and cargo links connecting London, East London and South Essex, and National Grid Substation partially submerged, as part of a larger plan for the region the Ultra Low Emission Zone ULEZ extension is proposed as far as the M25 outer ring road for London.

Proposed to the STFC, ground measurements of the position and physical illumination of Moonlight, for planning lighting for Smart Cities to reduce needless energy consumption, solar farms planning new generation of solar panels work at night and record light pollution values to improve viewing of the night sky, giving global official sightings of the Moon. by creating a CIE Moon sky dome link as their is for the Sun recorded at key locations including major airports around the globe, used in Physically Based Render (PBR) lighting environments for renders.

Offices often leave their lights on at night in the mistaken belief that the starter used more power than leaving the lights on, US department of energy, saving energy guild to when to turn off your lights link if your going to be out the room for 20min or more turn the lights off.